I’ve recorded a number of CDs and written a couple of instruction books. My most recent CDs are Scott Nygaard and Crow Molly and Rosco, with Roger Tallroth. You can get both from CDBaby. You can also download my Rounder albums from iTunes, order them through the links below (Amazon), or by emailing me directly: scottnyg (a) gmail.com

Scott Nygaard is one of the most eclectically satisfying acoustic guitar players around these days. As a sideman with Tim O’Brien and Laurie Lewis, he’s dazzled fans around the world with his blend of melodic inventiveness, harmonic sophistication, and technical virtuosity. On his second Rounder release, Scott blends all of his influences — bluegrass, old-time, Cajun, Irish, bebop, and even Brazilian choro — into a tasty blend that consistently delights the listener as it challenges expectations. Dreamer’s Waltz brings together many of the great musicians that Nygaard has played with throughout his career, from O’Boys bandmates Tim O’Brien (fiddle) and Mark Schatz (bass), to West Coast all-stars like fiddlers Darol Anger and Ruthie Dornfeld, mandolinists Mike Marshall and John Reischman, banjoist Tony Furtado, old-time virtuoso Dirk Powell on banjo, bass, fiddle, and accordion, Todd Phillips on bass, and even the ubiquitous Jerry Douglas on Dobro.

Scott Nygaard has worked in a variety of settings: bluegrass, old-time, Cajun, western swing, acoustic and electric jazz, and more. The selection of tunes on this all-instrumental outing is eclectic but focused. The jazz tunes, Frank Loesser’s “Never Will I Marry” and some Nygaard originals, swing lightly and the traditional tunes “Bury Me Beneath the Willow” and “Red Apple Rag,” smoothly shift gears into a country mode.

“No Hurry is a veritable smorgasbord of what can be done with six strings and a flatpick. Equal parts tradition and original tunes, this all-instrumental recording combines influences as far reaching as old-time fiddle music, bluegrass, swing and bebop into an intriguing, infectious mix.”–Acoustic Guitar 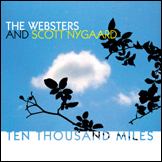 The Websters and Scott Nygaard

What do you get when you combine a soul/country singer-songwriter (Chris), a Baroque opera singer (Cassie), a bluegrass guitarist (Scott), a jazz bassist (Cindy), and an old-time fiddle prodigy (Brittany)? Well, we don’t know either, but the results are in your hands (or your CD player). As for what to call it, we can only use the much-maligned term “folk music.” But that’s assuming your definition of folk music includes the music of Louis Armstrong, Bill Monroe, Elvis Costello, Roscoe Holcomb, Ladysmith Black Mambazo, Ola Belle Reed, James Brown, Bill Frisell, Charley Patton, Django Reinhardt, Steve Earle, Billie Holiday, and Tommy Jarrell, as well as the usual suspects Doc Watson, Martin Carthy, Mississippi John Hurt, etc.

In this recording of traditional and sounds-like-traditional material, we’ve tried to keep things fairly simple, letting the sound of the voices and guitar stand out and the songs dictate the arrangements. But we were also lucky enough to have some assistance—the fabulous fiddle of Brittany Haas, the suave mandolin of John Reischman, the solid grooving bass of Cindy Browne and Todd Sickafoose, and the dulcet harmonies of Anthony Costello. And if you listen closely, you’ll hear another wondrous Webster (“Mom”) on “There Is a Balm in Gilead.”

This outstanding book/CD pack contains 15 classics of American roots music arranged for the acoustic guitarist – complete with background notes for each piece!
Songs: • The Blackest Crow • Bury Me Not on the Lone Prairie • Down in the Valley to Pray • Eighth of January • Golden Slippers • I Truly Understand • John Brown’s Dream • Little Liza Jane • Man of Constant Sorrow • New River Train • Over the Waterfall • Queen of the Earth, Child of the Stars • Rain and Snow • Richmond Blues • Willow Garden

Bluegrass Guitar Essentials provides a thorough grounding in the essential musical elements of bluegrass guitar. Scott Nygaard’s concise and well-written lessons cover all the traditional aspects of bluegrass guitar, from a primer on bluegrass rhythm guitar, fiddle tunes, the blues, and crosspicking to more contemporary approaches to flatpicking, including unusual chords and solo flatpicking. In each lesson you’ll find exercises, licks, and full songs to play in both standard notation and tablature, along with chord diagrams and fingerings. Includes CD with complete guitar transcriptions. SONGS: Greenback Dollar • Paddy on the Turnpike • Cuckoo’s Next • Sugar Baby Blues • Midnight on the Stormy Deep • Up the Creek • Kingdom Come • Black Mountain Rag • Billy in the Lowground • Whiskey Before Breakfast • Down in the Valley to Pray • Lonesome Old River